Reflective of the SEI mission is its logo.

The design of the logo is in the shape of a shield signifying the defense of the nation.

Emblazoned upon the shield’s left half (as viewed) are three swaths of color representing the three arenas of the special/diverse operator: Light blue for sky and air operations; earth-green for land and surface operations; and sea-blue for water and subsurface operations.  Icons graphically denote the operational aspects of each arena.

On the right half of the shield is a black swath representing the shroud–the void–of night in which the three arenas are exploited to their fullest.  It is further emblematic of the unique operational realm and refined “arts” in which the special/diverse operator works and perfects. 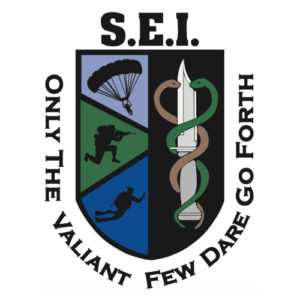 Superimposed upon the black field is a combat knife entwined with serpents in the form of a caduceus.  But unlike ancient Mercury’s serpent-interlaced winged staff–which is expressive of the “street” medical profession–the SEI caduceus is of a more profound nature.

The combat knife is representative of the highly-trained individual warrior and his/her capability and skills as a close-in fighter, capable of unilateral response and havoc.  The serpents are representational of the special/diverse operator’s stealthiness, quick-strike capability, and finality of results.

The symbolism of the two signifies the offended’s typical belief that twice the number applied the force inflicted.  Importantly, this form of caduceus is metaphorical of the type of medical care and/or function that the special/diverse operator renders: Bare-knuckles, down-in-the-dirt medicine and tactics.

The motto, “Only the Valiant Few Dare Go Forth“, underscores the commitment of the special/diverse operations warrior once tasked.  It is a reminder to all of the exceptionality of true patriots and warriors who place Country before Self.

News, thoughts and comments about S.E.I.